Last Will and Testament

What is a Last Will and Testament?

A Will is a vital component of every Estate Plan.  Although it has some limitations, one of it’s functions has not been replaced by any other document.  Perhaps its greatest value is as document that catches assets that were unknown or not otherwise provided for in a Trust or Beneficiary Designation.  For example, it is not unusual to learn that some who has passed was an heir to an oil and gas interest that nobody knew about.

Learn More at a Workshop:

A Will is a legal document that does several things: 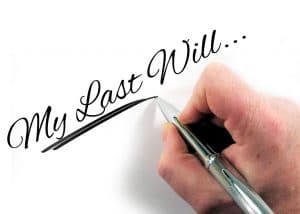 Executor:  It can name an Executor to be the person in charge.  This person is overseen by the probate court and is responsible for collecting your assets, paying creditors and distributing property.

Waive Bond:  It can waive the general requirement that the Executor obtain a bond.

What are a Will’s limitations?

How is a Will Created?

To make a nuncupative will valid, and to entitle it to be admitted to probate, the following requisites must be observed:

2. It must be proved by two witnesses who were present at the making thereof, one of whom was asked by the testator at the time to bear witness that such was his will, or to that effect.